Warning, this post is completely and utterly biased because I loved the entire place and literally want to move back there right now and live in a balinese homestay with my pet monkey, surviving off fresh watermelon juice and mie goreng!

The four of us, myself, Sammy, Sara and Matthew flew from Perth to Denpasar on the Saturday evening with Jetstar, this was probably the only part of the trip I didn’t enjoy as the staff were pretty unfriendly and spent most of the flight all sat together on the back rows of the plane chatting and doing their make up, and when we asked for a couple of glasses of water we were told that maybe we ‘should think about actually buying a bottle’. Apparently Jetstar don’t like giving away free water! Once we were off the plane and had collected our luggage we made our way over to the taxi rank, I’d read online that it was cheaper to walk out of the airport and go to the drivers to the left of the terminal but it was past 11pm at this point and we really couldn’t be bothered to put the effort in, so we paid 200k rupiah (around $20 aud) to get to the guesthouse we were staying at in the centre of Kuta. When we arrived at Maya Guesthouse we were greeted by friendly staff who showed us to our room and brought us fresh towels. We had quick showers and got changed before heading onto the main strip in Kuta with all the bars, shops and clubs, we walked the wrong way for a while before discovering Legian Street (the main street) was the street parallel to ours! I’d heard good things about Skygarden so we headed there first, but you had to pay to get in there and we weren’t sure how long we’d be out for so we skipped that one, heading instead to Bounty and Apache Reggae bar. Several hours later and we made it back to the hostel in the early hours of the morning, needless to say we did not have an early start the next morning!

Our guesthouse cost around 450k rupiah for two large beds in a big room with a bath and shower, as well as breakfast. There were a few options but we all got hooked on the pan fried noodles and fruit, such a good way to start the day. Once we’d eaten we spent the morning in a bar watching the Mayweather and Pacquiao fight, then the rest of the day exploring Kuta, there are so so many shops to look at and many different streets to walk down. My favourite part was the market, where we had a brilliant time haggling with the locals. We also took a walk down to Kuta beach which had great waves for those into surfing, it was really hot down there as well, great for sunbathing. We ate lunch at a restaurant called Yulia’s Kitchen, we didn’t eat at an expensive restaurant after that but it was lovely food so I’d say it was worth it, we ate traditional rice and noodle dishes which were all great, but we’d soon discover just how cheap we could eat the same meal for from street vendors! Later on we went for a Balinese massage which was great, only $5 for a full body massage lasting one hour. Whilst we were waiting for the boys we sat with the locals and tried some amazing local food called ote ote, which are small balls of vegetables that have been fried, as well as fried banana, it all tasted so good and me and Sara were hooked on it after that. We had every intention of heading out again that night, but after some amazing nasi goreng that cost us arounf $1.50, we sat downstairs at reception with some of the staff and had a couple of drinks, before we knew it, it was 3am and we’d spent the whole night with them laughing and drinking. Balinese people are the friendliest people in the world and the staff at Maya were just amazing, Hiro, Bayu and Ardian, we are so grateful to the three of you for making our time in Kuta so great.

We’d organised a private driver through our accomodation to drive us round to a few temples and then on to Ubud, it was sad to say goodbye to the guys at Maya, but I was looking forward to staying in a more traditional Balinese town for a few days as well. You can hire a driver for around 550k rupiah which is abour $55 aud, between four people that really isn’t bad, especially when you get to see the palces that you want to see in your own time. We set off around 11am and headed first to Uluwatu, driving is also a great way to get to see lots of ther places in Bali as you pass through other towns and villages on your way, we could ask our driver Kadek lots of questions about the local area as well which was great. The temple at Uluwatu is really beautiful, it’s situation on a cliff so has great views of the ocean. It is also surrounded by monkeys which even the locals appeared to be afraid of so watch out for them. We stopped for lunch which again cost us a dollar or so each for local food, I don’t know why people are funny about eating local food because we all ate it and were fine, plus we saved ourselves a hell of a lot of money! Our next stop was Tanah Lot Temple which was a bit of a let down to be honest, you couldn’t actually walk up to the temple and when the tide is out there’s just a lot of dirty sand to walk on so it’s not the most impressive, although it does look good in the photos we took. On our way over to Ubud Kadek stopped at a Silver and Gold shop that sells lots of jewellery made from Balinese gold and silver, although way too expensive for us it was nice to see some traditionally made pieces. When we arrived in Ubud we checked out a couple of different homestays before finding somewhere cheap yet very nice called Pica Sedana, our driver helped explain what we needed in Indonesian which was helpful! A very lovely old lady helped us pull a spare matress into a room so we could all stay together which was good, I think the first night cost us 300k rupiah, again this included breakfast. After we’de ditched our things we went for a quick walk through Ubud, stopping for dinner at a very cute looking cafe called Biah Biah, we ordered a few smaller dishes to share, whilst the food was lovely it was the first place we ate in Bali where the staff didn’t seem to care, barely looking at us when we ordered and not very chatty. I think there are nicer places to eat as there are literally hundreds of places to choose from in Ubud! I think we had quite an early night after that as we were all knackered after all the travelling and temples the day before!

The next morning we organised a driver through Pica Sedana to take us out to see more sights for the day, we left after breakfast with Wayan who again was really helpful and friendly, happy to answer all the random questions we had for him. We visited Goa Gajah or Elephant Cave, which has both a hindu temple and a buddist one, then we went to Besakih Temple which hindus call the mother temple, when we got there we could see why! There are so many temples within the temple, it’s crazy, all beautifully decorated and with the amazing backdrop of Mt Agung. You get hasseled a lot at Besakih though, they bully you for ages into getting a guide and then follow you round insisting it’s impossible to see the temple without them, ignore them! We had to basically do a runner from a guy that wouldn’t leave us alone but we finally lost him and got to explore the whole temple which was lovely. We stopped on the way back down the mountain for food at another local place, before Wayan insisted we stop to try local coffee, I don’t even like coffee but I’m so glad we stopped. We walked down this almost invisible path off the side of the road which brought us out to a clearing where they offer tastings of this local coffee, the view is absolutely incredible, out onto rice paddies and palm trees! One woman was roasting coffee beans infront of us, it was great! We tried lots of different hot drinks including vanilla coffee, mangosteen peel, lemongrass tea, hot chocolate and coconut coffee, even I tried most of them and I can’t stand coffee! All the tastings are free, you just pay for the kopi luwak coffee which of course we felt we should try, it’s supposed to be the most expensive coffee in the world, it as definitely the strongest I’ve ever had! The seeds of the coffee berries are collected from the floor of the forest, after what is basically a big cat has eaten them and pooed them out again! After that strange experience we drove down to Kusamba to see the salt mines, not quite what we expected when we arrived, we thought there would be an actual mine but it was actually just one guy who basically collected salt water from the sea, poured it into these troughs and then dried the water out leaving the salt behind! Amazing to see and even better to taste, so much better than any store bought salt we eat usually. On our way home we stopped off at Tegalang Rice Terraces which look awesome, so much land carved out of the side of hills and dedicated to growing rice, everything is so green and smells so fresh, it’s amazing. We were speaking to Wayan about the police and government in Indonesia, whilst he didn’t mind speaking to us he kept saying he only tells us because we are friends and we can never tell anyone what he’s said, so sad that people are not able to voice their opinions on such things without being scared. 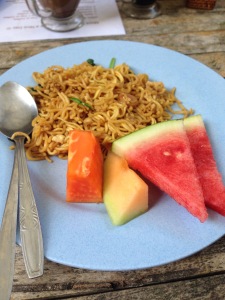 offerings to the gods and the devil on the streets of kuta. 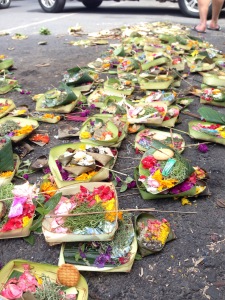 ote ote, the greatest food ever. 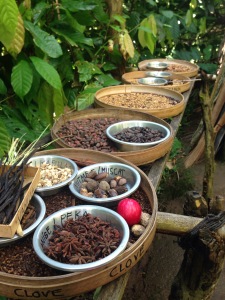 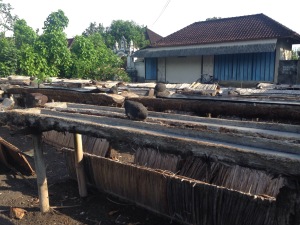