What an awesome day at the Crossfit Regionals in Wollongong, we’ve both been into Crossfit for a while now, with it being so expensive we haven’t been able to join a proper gym as of yet, but it was still awesome to go and see the qualifiers for the games. The Pacific regionals are held in Australia each year so there are athletes from all over Australia, Asia and China competing to be in the top five, securing themselves a place in the Crossfit Games in America later in the year. We went for the third day and got to see two events for the group teams, two for the female athletes and two for the male athletes, each of the events looked so challenging I don’t know how they even begin to feel prepared to take them on!

The strength and stamina of everyone taking part is crazy, there’s such a good atmosphere in the stadium and everyone really gets behind the athletes, cheering them all on, it’s awesome. I love Kara Webb so it was great to see her place first in the whole region! It’s also super motivating and we are both ready to get back to the gym when we finally stay still in one place long enough! After the games we met one of my old friends from back home who moved out to Australia a couple of years ago and is really into Crossfit as well. She actually lives in Melbourne but we somehow didn’t manage to meet up whilst we were both living there, so it was good to catch up finally. We went for a drink at the Illawara Brewery which is part of the WIN stadium where the games were held, they do $16 jugs of cider which is cheap for Australia! I’m so glad we planned the end of our trip around going to the Games, it was such an awesome day! 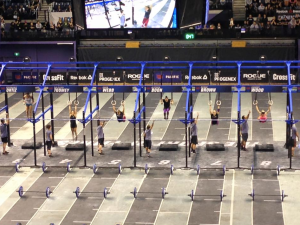 One response to “crossfit regionals.”