I’ve watched the state of origin games online with a dodgy connection that stops and starts every few minutes for the last few years, I don’t think I’ve ever supported the same team two years in a row and I always miss the announcement of the teams, but finally, all these years later, I got to watch state of origin not just in the same time zone as the actual game, but actually watch the game live right in front of me! Needless to say I’ve been excited about this since we booked the tickets back in February, in fact this whole road trip was based around us needing to be in Sydney on the 27th May.

We’ve spent a couple of days in Sydney purely because we were going to the game so we haven’t done any sightseeing or touristy things, we’ve just been going to the gym and catching up with friends, the main thing we’ve been looking forward to was the game! Your ticket gets you free travel to the game which is awesome, we got the train from Kings Cross to Central and then from there to the Olympic Park, obviously the trains were rammed with fans so it was a good atmosphere heading over. We arrived about an hour and a half before the game started so we had a look at the different stalls, merch, bars etc. then went up to the rafters to find our seats. Tickets were really expensive for the game, even seats like ours that were really high up were a lot of money, we didn’t want to spend too much on them but we were right in the middle of the pitch and we could see everything that was going on so I don’t think being high up really matters too much! The final attendance was 80,100 ish and you couldn’t half tell whilst you were there, the crowd gets so into the game and the atmosphere is just awesome! We were rooting for NSW of course, we did really well throughout the whole game but in the end it was Queensland who won, 11-10. I’m not going to pretend I know enough about rugby league and sport in general to now write a load of details about the game etc. but what I can say is that we had an amazing time watching two awesome teams play a brilliant game of rugby league, well worth the expensive tickets!

anz stadium at the olympic park. 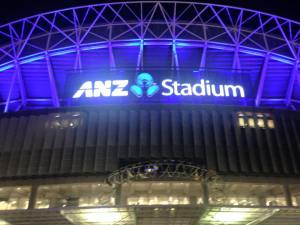 selfie at the stadium. 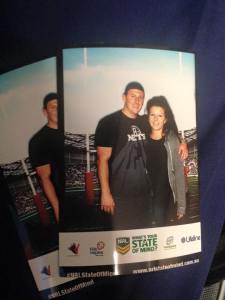 panorama of the stadium, our seats in the rafters. 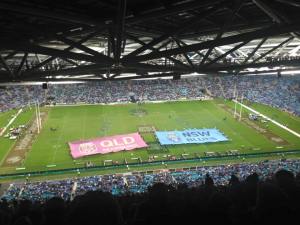 the new south wales team heading onto the pitch.