The last couple of months since we returned to Quilpie have been a bit manic to say the least. I’ve been constantly worn out having been so busy everyday and most evenings as well, but it’s been amazing and I’ve had a great time! I’ve been struggling to remember everything that we’ve been up to but hopefully this pretty much covers everything…

Elle was away for the first couple of weeks that I came home, so it was back to normal running the newsagency and trying to remember all the tiny details and daily jobs to keep things running until Elle returned. She was home for about a week before heading off again, but in that time we went for an amazing dinner at Bob and Lors and had plenty of time to catch up and keep each other company in the shop which was great.

Sam and I took a trip out to Toompine at the weekend to see Laura and Gina who were leaving to go travelling for a few weeks, we cooked ourselves an amazing BBQ and had some drinks whilst catching up on the local gossip and what everyone had been up to, such a lovely way to spend the evening.

ready for our huge feast.

The next week Elle had to go back to Brisbane to be with her Mum again, so it was back to being just me… I know I know, get the violin out! However that weekend saw the start of some great friendships and good nights out which has really made me love being back in Quilpie. We went to Barefoot Bowls on the Friday with Drew, where I met Amy who’s the girlfriend of Joe that we’d met at Polocrosse, we really hit it off in our drunken conversations so that was good! This was followed the next morning by breakfast at Amy’s house where I got to meet Peewee and Splita’s pups, Gemma and Daisy, they’re so cute! Later on we went and watched Quilpie vs Tambo in the cricket, followed by a bit of a session in the pub with Amy and Joe, as well as some more new friends; Scott, Gabby, Jess and Owen. Many drunken games of pool were played, all of which I’m pretty sure I won… ha! 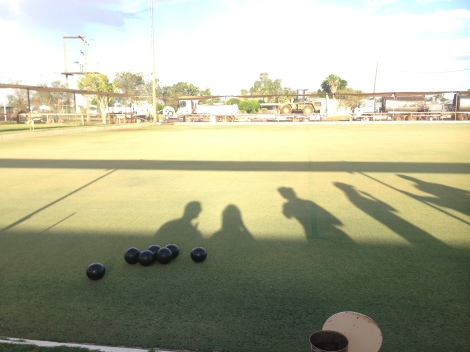 Gemma being just the cutest. 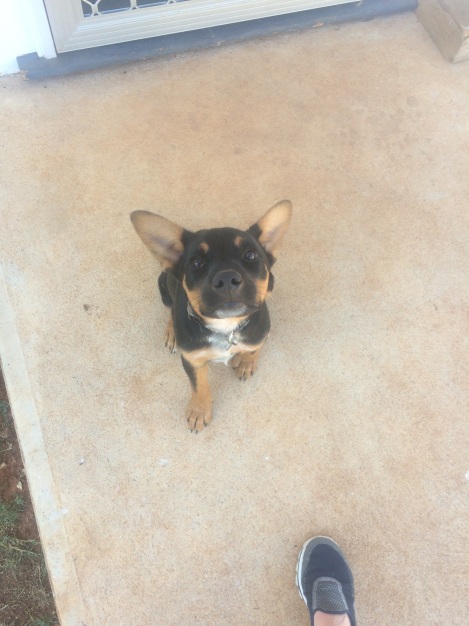 Sam had to head back to work out at the station he’s on at the minute so unfortunately he missed out on the Sunday at the lake, which was so much fun. It was really hot but we took some snacks, beers and camp chairs and sat in the lake cooling off, such a great way to spend a Sunday! 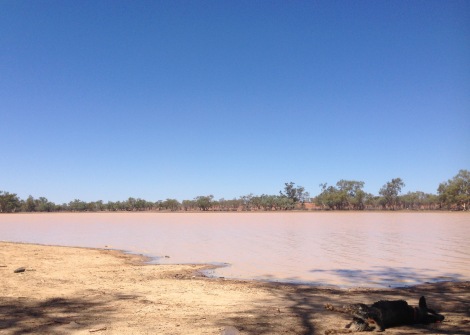 I went with a friend Leah and her two little boys to the Christmas for the Bush Bash, which was held at Bulloo Park. Care Outreach put on a free BBQ, music, carols and entertainment for the kids for the night, which got us in the festive spirit a bit, plus it was good to go to something so community based.

The next week I agreed to start working at the local pub, as if one job wasn’t enough for me! So I did my first shift on the Monday and actually really enjoyed it, the money is really good as well which is a nice little bonus on top of my other wage. I also went for a lovely pizza dinner and drinks at Soph’s house with Cindy who works at the same property as Sam, ended up having to leave the car at hers after one too many drinks, whoops! I worked the Thursday that week as well which was a lot busier than my first shift, but the time flew and I really enjoyed it, seemed to pick everything up really quickly which is good as I don’t feel like a spare part just hovering round all the time.

pizza nights are the best. 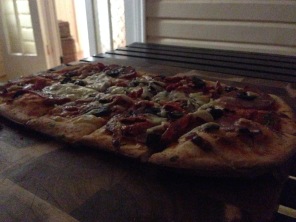 The next weekend involved more alcohol, of course. I worked a couple of shifts at the pub and had a good week at the shop getting all the Christmas stuff sorted. Had to leave my car at work on the Thursday after a few too many, then on the Friday it was Sam’s birthday!! So of course that called for another visit to the pub, then on to the local Landmark Christmas party and then there were drinks at ours afterwards which resulted in me not going to bed until about 4am, waking up at 9am realising I was supposed to be at work, oops! Luckily I made it just a couple of minutes late and survived the few hours, before we headed to the lake for a BBQ and a swim to celebrate Sam’s birthday. Just to finish me off for the day we went to a party for a couple of friends, Robin and Gary, who had got married the week before!

portion of the food and drink from the lake trip.

Reading back through all this I can’t believe I’ve fitted so much into just a few weeks! I’m looking forward to getting back to keeping up with my blog again, but for now here’s part one of the big catch up, more to follow this week!